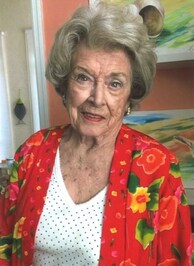 Mina was blessed with three children, son Michael Hight of Lebanon, IN and daughters Mrs. Victor (Patsy) Zelinsky of Peru, IN and Mavis "Murry" Hight of Knox, IN. She also leaves behind six grandchildren, Michelle Hight Thomas, Cindy Hight, Andy Zelinsky, Sonja Zelinsky, Rob Hight and Katie Watt and eight great-grandchildren as well as many nieces and nephews.

In addition to her husbands, Robert and Ernie, she was preceded in death by her parents, one great-grandchild, sisters Thelma Holland Murphy Gustin and JoAnne Holland Smiley and brother John W. Jerry Holland.

Mina spent many years as a business manager for Dukes Memorial Hospital. She then moved to Indianapolis after her second marriage and worked at Winona Hospital until her retirement. After retirement she spent many winters at her home in Jensen Beach, FL where she loved to fish and hunt for seashells.

She returned to Peru in 1997 where she was a lifetime member of Peru Garden Club and her yard was always in bloom. Mina was also a member of St. Charles Catholic Church. She also did volunteer work for Miami County Museum, as well as volunteering as a seamstress for Peru Circus City Festival where she made beautiful costumes during the 1960's. She was very creative and made three generations of unforgettable Halloween costumes as well.

Once, she was interviewed about her time spent in the U.S. Navy Civil Service during WWII and her recollections were published in the book "Americas Homefront Hero's" written by Stacy Enyeart. Mina was truly a "Rosie the Riveter".

Mina was a fun loving person and never said "no" to going places with family and friends. She will be missed by her friends and family, but mostly by her children who always have a "Minie" story to tell.